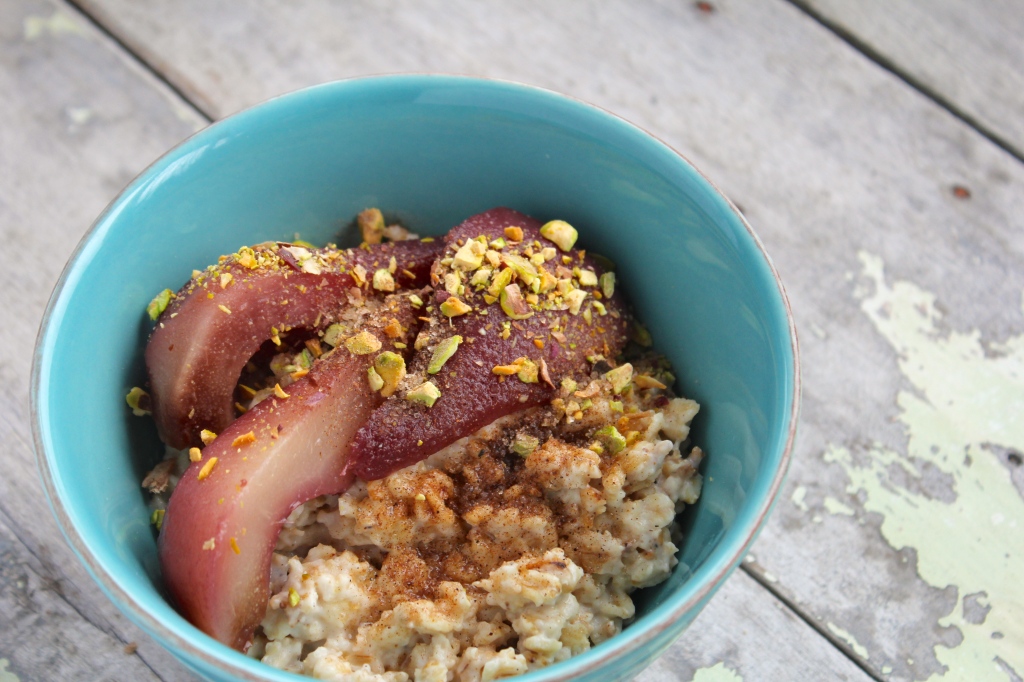 Many years ago I spent about 12 months living in a big old share house on top of the hill in Brunswick. It had a bright red front door and a hallway full of bikes in various states of use and repair. It was right next to car wash in which we held some pretty epic parties, and it had a lovely green garden that caught the morning light.

It was a great place to live – I made good friends there, and wrote most of my thesis there as well. The one downside was that it was freezing fucking cold during the long Melbourne winters. My room was out the back and had this great big window overlooking the backyard. Beautiful in summer letting in all the light, but so cold in winter letting in the air gusts between the cracks. I used to hunker down in bed, dreading the midnight toilet run.

There was a stage while I was living there where myself and two of my housemates – and good friends – would all be rambling about the kitchen the same time of a morning ready for breakfast, so we would often cook up a big pot of shared porridge. It was usually pretty basic – oats and milk – but Piers’ taught me the trick of adding freshly grated ginger and lemon rind for a bit of zing, something I still do to this day. We’d eat at the round table pushed up underneath the window, reading the newspaper or catching up on uni work. I remember it as a peaceful start to the morning of days which would most often, for me, end up in the university library. 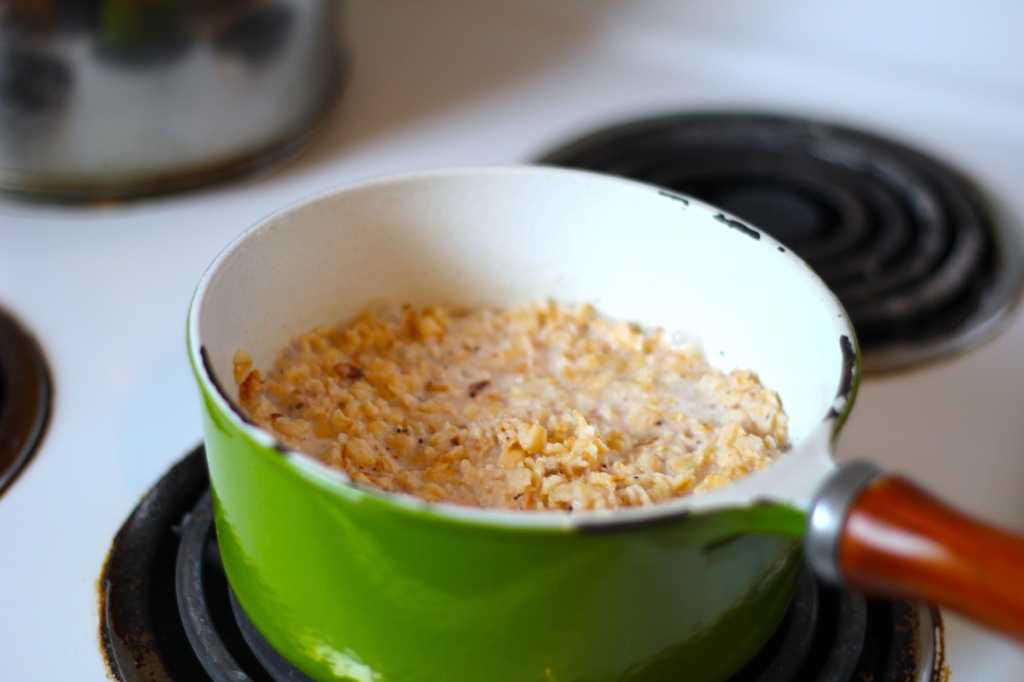 These days, I still eat porridge for breakfast most days of the week during winter; there’s nothing like a steaming hot bowl of creamy oats on a crisp morning. Usually my porridge is some kind of variation on the humble oats-and-milk, made in my very favourite small green pot that we found at a second-hand store when we first moved to Brisbane. Sometimes I’ll add a handful of cooked quinoa, or some spices, or dried fruits. It’s always topped with a spoonful of honey, some fresh fruit, and usually a sprinkling of crushed nuts or chia seeds. Lately I’ve been getting some great topping ideas from Heidi at Apples Under My Bed.

This porridge recipe is a little fancier than my usual one, but still relatively straight forward and delicious. Toasting the oats gives the whole bowl a nutty aroma, and soaking overnight definitely makes the porridge a lot creamier. If you forget to soak overnight, just add an extra half a cup of water and a few minutes cooking time on the stove, but once you’re in the habit of an overnight soak you’ll realise it is so easy and worth the couple of minutes effort. 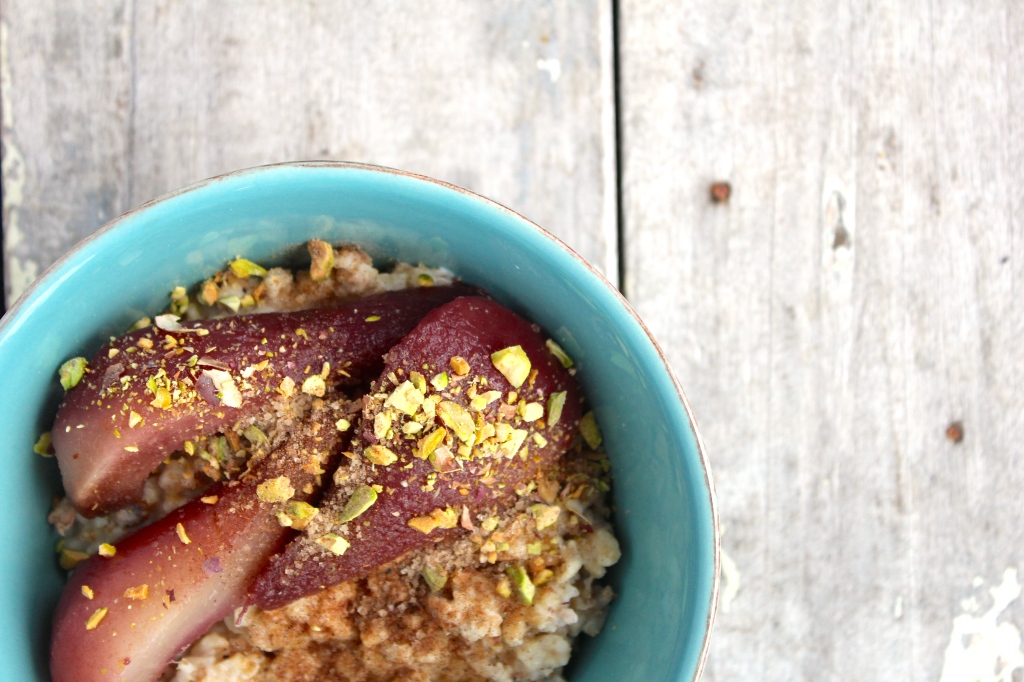 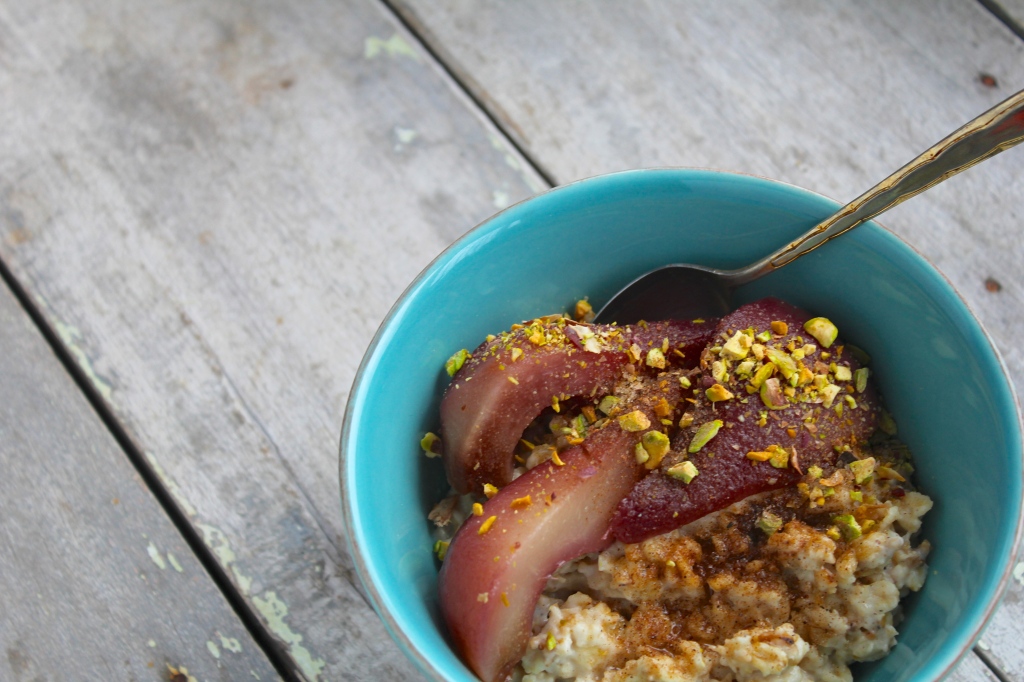 What really lifts this porridge into the fancy realm, though, is the boozy poached pears. It is my mums recipe, and it is absolutely delicious. Delicately spiced with a rich flavour from the wine (and a lovely purple colour), these pears are both decadent and light. You’ll get enough pears from this recipe for a weeks’ worth of porridge, but you can also serve them like my mum usually does – as dessert with a big scoop of vanilla bean icecream! And while I generally prefer honey rather than sugar in the morning, this spiced sugar (inspired by The Sugar Hit) is oh so yummy. 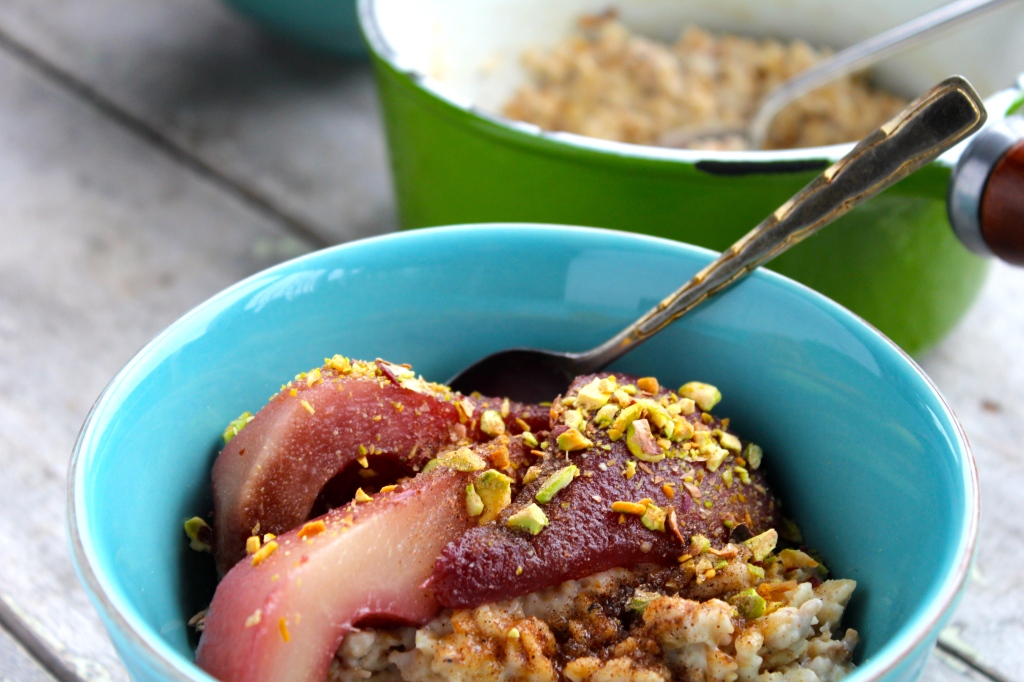 Peel the pears, leaving the stems attached, then cut in half and using a spoon or sharp knife remove the seeds and core. In a heavy-bottomed pot place the pears in a single layer, cut side down. Add the red wine, water, lemon juice, rose water, sugar, cinnamon and star anise. Bring to a boil with the lid on, then remove the lid and simmer for approx. 30 minutes. The pears should be tender but still holding their shape.

Store the pears in the red wine juices in the fridge. They will keep for up to 5 days.

Thoroughly combine the raw sugar, cinnamon and cardamom. Store in a sealed jar.

The night before you are planning to eat the porridge you’ll need to toast and soak the oats. To toast, place a pan over a medium heat. Add the oats and toast for about 8 minutes, stirring frequently. Remove from heat as they start to brown and smell nutty. Soak in a bowl, covered, with the cup of water.

In the morning add the soaked bowl of oats, the cup of milk, and the pinch of salt to a saucepan over medium-low heat. Stirring frequently to prevent sticking, cook for approx. 12 – 15 minutes, until the porridge is nice and creamy. If it looks too thick towards the end of cooking, add a splash or two more milk.

Divide into two bowls, top with poached pears, a spoonful of spiced sugar, and a sprinkling of crushed pistachio nuts (if using). Eat immediately!

Notes: I like to use almond milk in my porridge, but really any milk will do. With the pears, make sure you choose ones that are ripe but still firm; if they’re too soft they’ll fall to mush while poaching. As for red wine, use whatever you have on hand – and save the rest to drink later on with dinner.