Last week was a big one for our little family. W turned two on Tuesday – two years old! We celebrated with banana & honey cake, sparklers, and many many cuddles. I’m not entirely sure she understood what was going on, but she had fun, I think. And today T is exactly three months old. It’s hard to believe – seems like he’s been with us forever.  The last meal I ate before my contractions kicked in was a banana smoothie and a brownie; the first meal post-birth was peanut butter & honey on toast, and fresh strawberries. This is how families are made!

On another note, how was your weekend?

Mine was… lovely and exhausting, in equal measure. Saturday morning we headed to the local markets to pick up our fruit ‘n’ veges for the week, get croissants and coffee, and sit under the trees reading The Saturday Paper. That afternoon S cooked up a delicious pho and after the kids went to sleep we caught up on Game of Thrones, with a glass of beer (my first one since T was born!) and a tub of Ben & Jerry’s.  All most lovely. Sunday, though, was somewhat less chilled out. Both kids were grumpy, neither napped well, and by the time night came around S & I crawled into bed, very very tired. 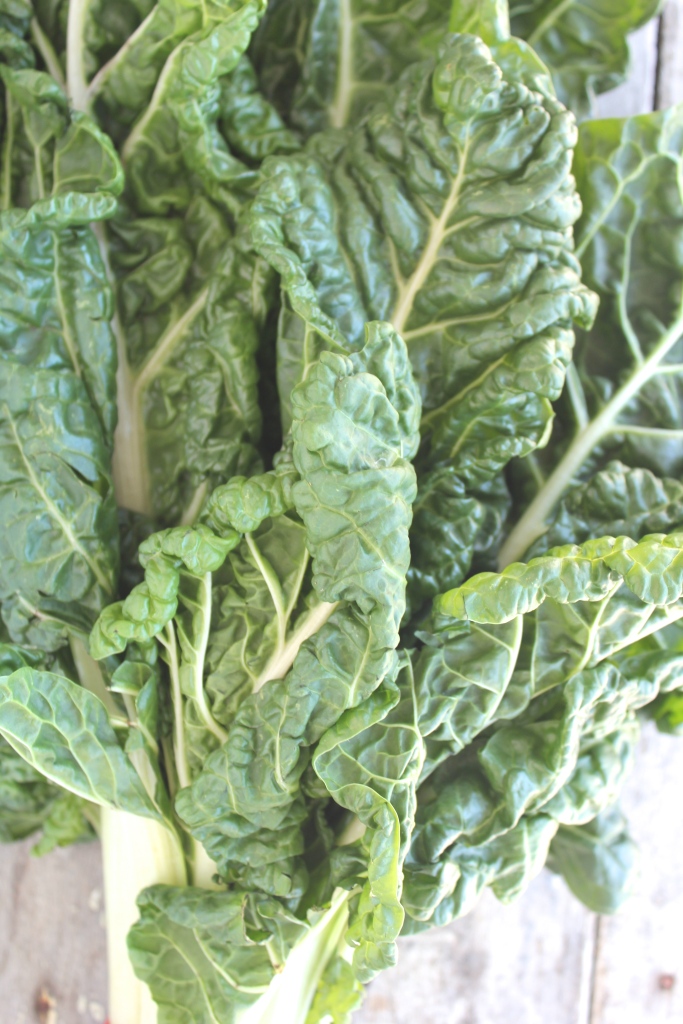 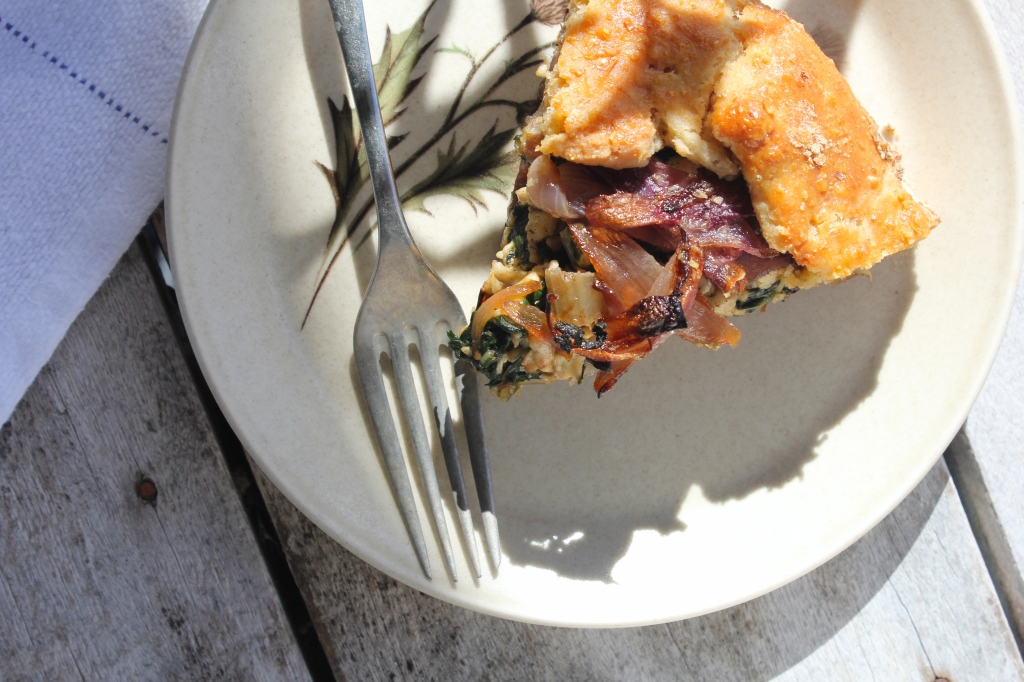 But enough about me. It’s a new week, so let’s talk about this Silverbeet & Haloumi Galette. I made it on a whim last week after dropping into the fruit ‘n ‘veg shop in the morning and coming away with the best looking bunch of silverbeet. I felt like spending some time in the kitchen – and I wanted to make something that would let the silverbeet shine – so on the walk back home I decided on a galette. It turned out so good that I made it again just a few nights later.

I used wholewheat flour in the galette pastry for a more rustic taste/look/feel, and kept the spices to a minimum so as to let the flavour of the silverbeet and haloumi take centre stage. The caramelised onion tops it off with a hint of sweetness and texture. It made a wonderful dinner on a balmy autumn evening, and the leftovers were delicious cold for lunch the next day.

I did, however, have a few disasters while photographing it. First time around I put the galette in the oven later than planned and so by the time I was taking photos the sun was setting and the light was all off. Second time around, just as I had everything out on the table and ready to go, both kids woke up. S took the baby for a cuddle, but W was teary and kept walking around after me tugging on my pants and asking to be picked up. Not the most conducive to taking my time with the camera. In the end though W was distracted by a bunch of grapes, and the afternoon sun slanted in across the galette just as I sliced it, making for these lovely photos. Totally different to what I had planned, but sometimes that is the beauty of it. 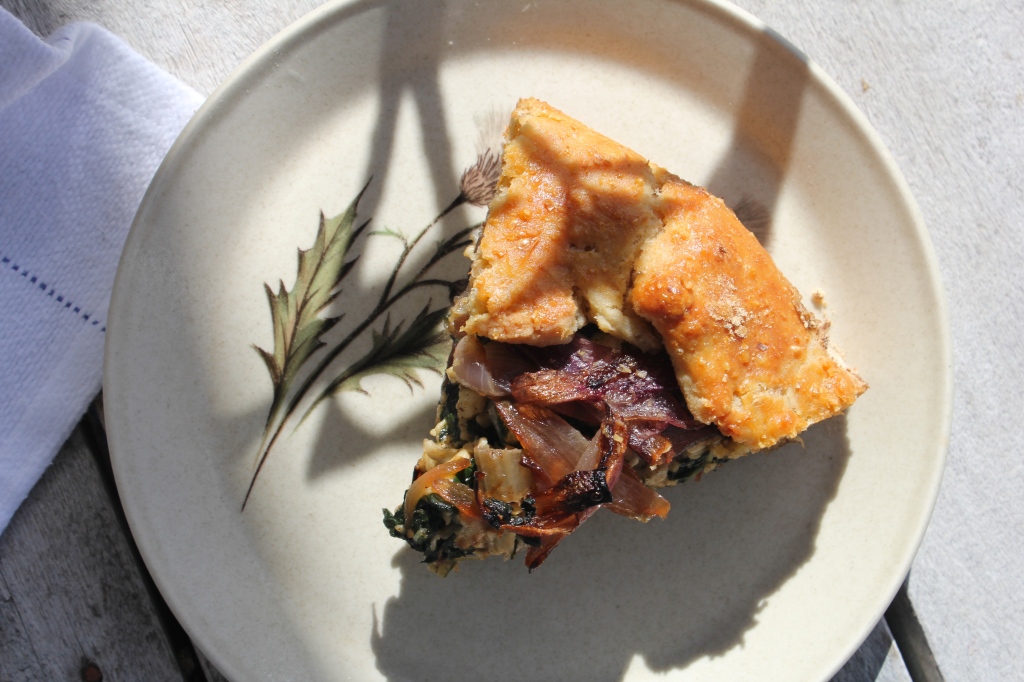 Start by preparing the pastry. Combine the flour and salt in a large bowl. Cut the butter into chunks and using either your fingertips or a pastry cutter work through the flour until it resembles coarse breadcrumbs (a few larger chunks of butter are fine). Combine the yoghurt and water and add to the flour mixture, using a wooden spoon to mix until just combined (don’t overmix). Use your hands to form a small disc out of the flour, wrap in plastic, and pop in the fridge for at least 30 mins.

Peel and finely slice the onion. Put a generous glug of olive oil into a heavy-bottomed pot (like a Chasseur) over a medium-low heat and add the onions. Cook for about 15 minutes, stirring occasionally, until softened and starting to caramelise. Remove from the heat and set aside.

Remove the stems from the silverbeet and slice. Finely chop the leaves. Wipe out the pot that you used to cook the onions and return to the stove over a medium heat. Add a splash of olive oil along with the silverbeet stems to the pot and cook until softened, approx. 5 minutes. Add the leaves to the pot and stir to coat in oil. Sprinkle in the allspice, salt & pepper to taste, and stir through. Cover the pot and leave until the silverbeet is wilted and tender, about 5 – 10 minutes. Transfer to a colander and leave to drain. Once cooled, use your hands or the back of a spoon to squeeze as much liquid as possible out.

Coarsely grate the haloumi and stir through the cooled silverbeet.

When you’re ready to start assembling the galette, preheat your oven to 200° celsius/400° fahrenheit. On a floured bench roll out the dough into a circle (approx. 30cms). Pile the silverbeet/haloumi mixture into the middle, leaving a border of about 4cm all around. Place the onion over the top. Fold the border over the mixture, pleating as you go to make it all fit in.

Whisk the egg together with the teaspoon of water and brush it over the crust. Bake in the preheated oven for 40 minutes, or until the crust is golden brown. Remove from the oven and enjoy immediately while hot, or once cooled.

Notes: the trick to a flaky pastry is to work with ice cold ingredients so that the butter doesn’t melt until it is in the oven. Depending on how warm your kitchen is, it can help to put the flour, and even the mixing bowl, in the fridge before you use it. And whatever you do don’t forget to chill the dough before rolling it out, and again afterwards.