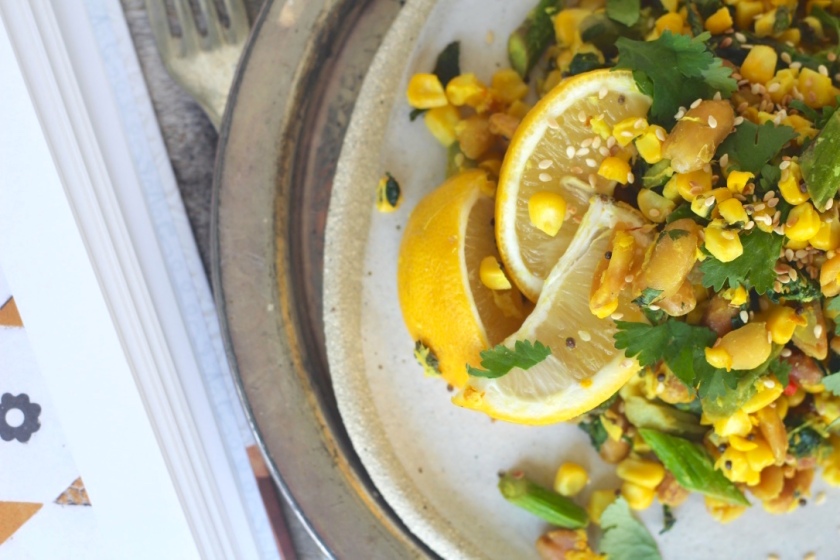 In these days of food blogs and online savvy, I’m relatively picky when it comes to buying cookbooks. I have a few on the shelf that I refer to time and again and though I’m always flipping through the glossy pages of cookbooks at the book shop it’s only rarely that I’ll purchase a new one. However Heidi Swanson’s new book, Near & Far: Recipes Inspired by Home and Travel, was a no-brainer.

You’re probably familiar with Heidi Swanson through her blog 101 Cookbooks. In fact, you’re probably already a fan. It’s hard not to be. Heidi’s signature style is unmissable. Her muted photography, easy storytelling, and wholesome recipes are among the gold standard of food blogging. And the same applies to her books. Near & Far is a work of art. It feels good in the hand; textured cover and thick matte paper. Part travel journal, the images weave a story from a door frame in Morocco to the streetscape of San Francisco, complimenting the recipes and the words and combining to create a strong sense of wanderlust. From India to Japan, Heidi evokes a strong sense of place, of looking from within rather than from without.

And of course, the recipes themselves are the bomb. Heidi’s style is vegetarian whole food, deceptively simple dishes that are inspired, creative with combinations and unexpected ingredients. Everything I have cooked from Heidi’s blog has been spot on, and so far this book is proving to be more of the same goodness. There is so much in Near & Far that I have bookmarked. The Brown Sugar Tofu sounds delicious, as does the Miso Oat Porridge, the Nori Butter, the Saag Paneer, the Fregola Sarda. Plus I’m digging on some of the accompaniments, like the Flower Pepper, the Orange Thyme Za’atar, the Cultured Honey Butter.

But first up, I turned straight to the India section. Having traveled to India myself, several times, I harbour a deep love for both the culture and the cuisine. Whenever I arrived someplace new in India – be it a new city, a new street, a new market – I would buy a cup of sweet strong hot chai from a street-side chai-wallah, squat down against the curb, and drink it all in. The markets were my favourite. Street side piles of sleek red-hot chilli, ripe round purple-streaked eggplant, tangles of garlic and turmeric and ginger, strings of sunset marigolds. 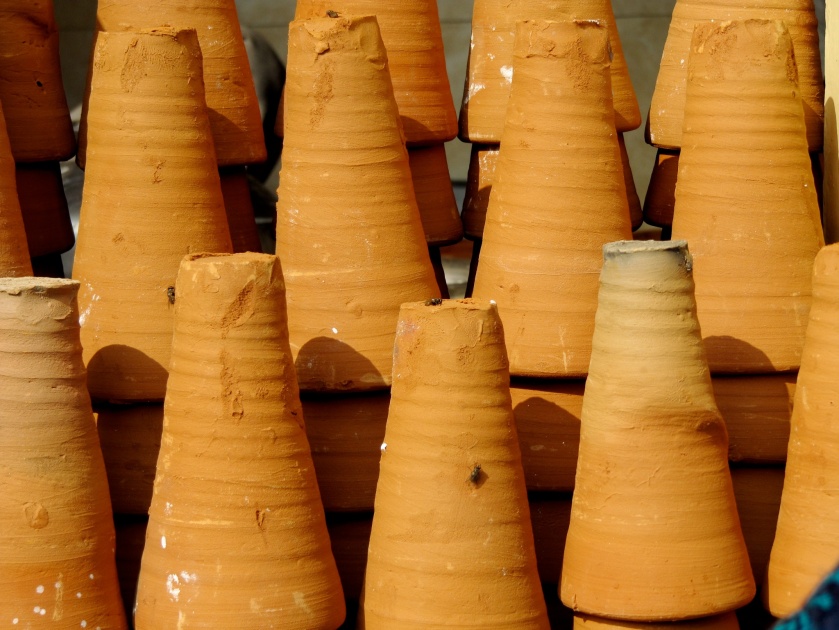 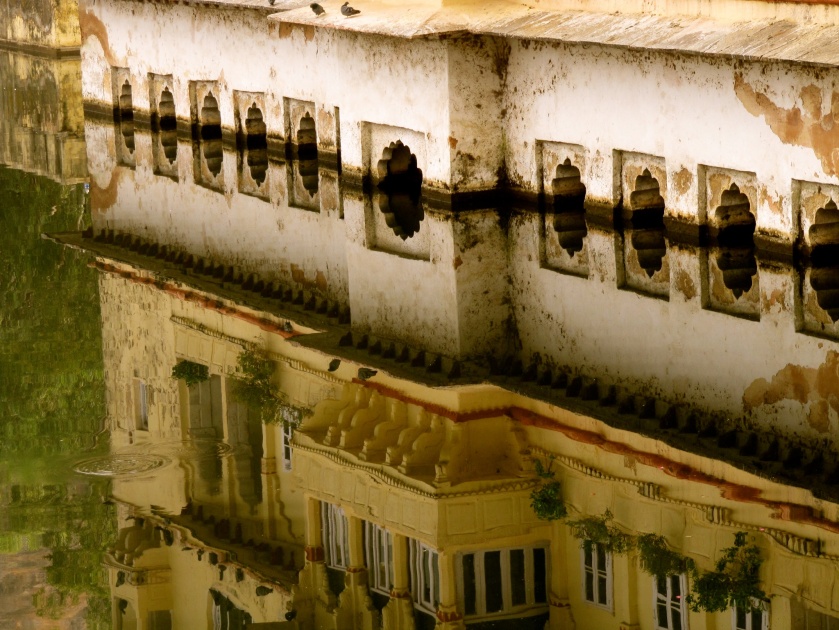 The last time I was in India, almost four years ago now, I spent about ten days in Jaipur attending the Jaipur Literature Festival. India’s pink city is the gateway to Rajasthan, the Land of Kingdoms. Like the rest of India, it is chaotic and colourful and beautiful. And full of amazing food. The best garlic na’an I ever ate was at a small restaurant just outside the walls of the old city; chewy dough browned crispy at the edges, flecked with ghee and fresh aromatic garlic. Every morning during my stay I would walk from my hotel to the festival site, braving the traffic and the dust just so I would pass a hole-in-the-wall lassi stall. Clay cups (those in the picture above) were stacked out the front and ice cold lassi was ladled out of big silver vats. It was the best kind of breakfast.

The makhaniya lassi from Near & Far is exactly like the ones I remembered loving in India – creamy, rich, slightly perfumed with a hint of sour yoghurt tang. Lassi is easy to make and given how simple the ingredients are, I’d recommend sourcing the best quality that you can find. I made these lassi with Greek yoghurt which made it extra-uber-thick, spoon-able rather than sip-able. Just the way I like it. Of course, if you prefer it a little thinner go ahead and use regular plain yoghurt. I split the lassi between two of us and it made a special weekend breakfast; split four ways I imagine it would be a perfect dessert. 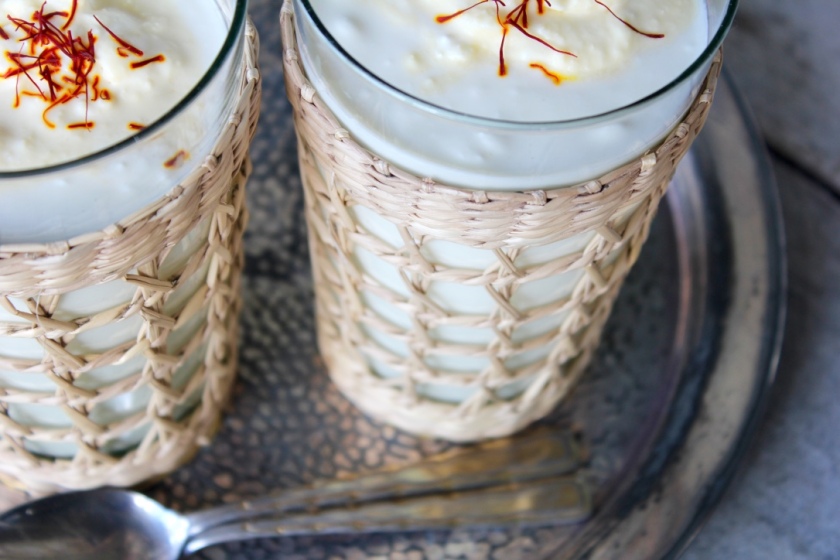 I was also drawn to the bright colours and bold flavours of the Vaghareli Makai in Near & Far. Indian food in Australia tends to be curry-based and is often a little too oily, a little greasy. This Vaghareli Makai is just the opposite of that; it is fresh and packed full of flavour. It comes together in a snap and the fresh corn marries beautifully with the crunchy peanuts and lemon zing. Heavy on the ginger, the turmeric, and the chilli. Just the way I like it. 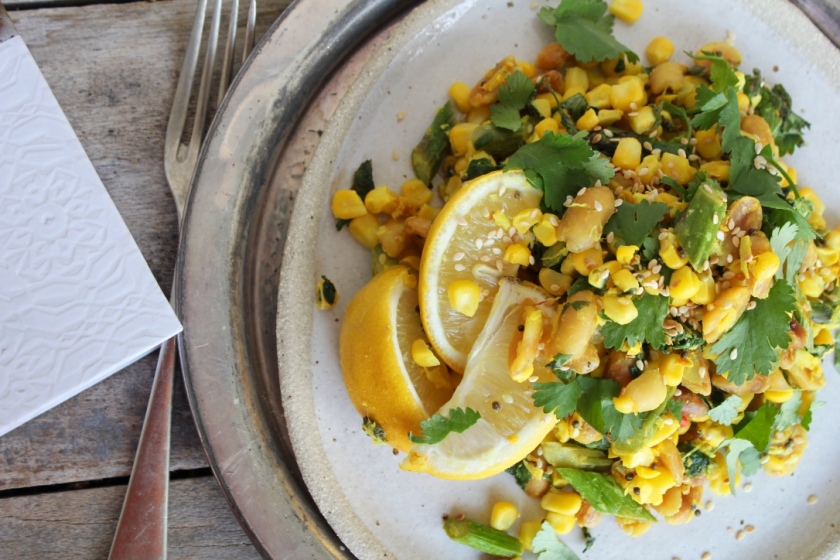 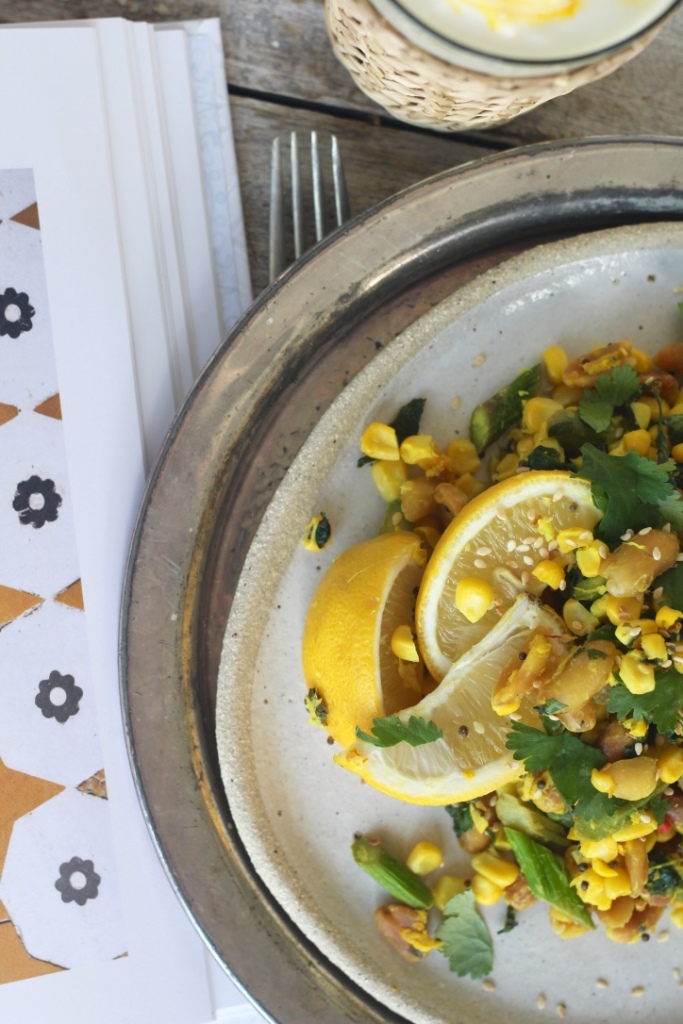 I will be making both of these dishes many, many more times this coming summer.

Adapted (barely) from Near & Far: Recipes Inspired by Home and Travel

Using either a food processor or a mortar & pestle combine the chilli, garlic, ginger, turmeric and salt into a paste. Set aside.

In a large pan heat the ghee/butter over medium-high heat until melted. Add the mustard seeds and once they start to pop and sputter, throw in the corn and asparagus. Stir to coat in the ghee and continue cooking for a minute or two before adding the peanuts, half of the coriander, and the chilli paste. Cook for another couple of minutes then remove from the heat and stir through a generous squeeze of lemon juice.

Serve straight up, or over a bowl of brown rice or barley. Top with the rest of the coriander and sesame seeds.

Adapted (barely) from Near & Far: Recipes Inspired by Home and Travel

Dissolve the honey in the water. If the honey is too thick, use hot water and then cool the mixture in the fridge before using.

Mix the crème fraîche and cream together and whisk until just past the point of whipped; it will start to look a little clotted. Set aside in the fridge.

In a large jug combine the honey water, yoghurt, and the rose/orange blossom water, if using. Using a long spoon stir gently until combined (Heidi recommends using a large jar and gently shaking to combine but I didn’t have a large enough jar!).

Divide the lassi mixture between two large glasses (or four smaller ones), top with spoonfuls of the whipped cream, and garnish with threads of saffron.

Enjoy with a spoon, while icy cold.