“Oh madam, when you put bread and cheese, instead of burnt porridge, into these children’s mouths, you may indeed feed their vile bodies, but you little think how you starve their immortal souls!”

– from ‘Jane Eyre’ by Charlotte Bronte

My friend Nev is of the belief that savoury porridge will be the next big food fad. And it has been popping up in more and more places, from the hipster cafe that I frequent in Footscray (their version is topped with grilled octopus and pickled vegetables, and is fucking great) to Bon Appetit, and on various food blogs here and there (Heidi, of course, being a good few years ahead of the trend).

Few meals are more comforting, of course, than a steaming hot bowl of porridge. As noted by Bronte, porridge is most definitely soul food.

At first the idea of savoury porridge seemed unappealing somehow. Until I realised that congee is, pretty much, savoury porridge. And I love eating congee. Side note: at a share house I lived in some ten years ago my housemate at the time (and lovely friend) would slow-cook pots of congee on the stove for hours at a time while we were all at uni; it is only by the grace of all that is holy that our ancient warren of a house didn’t burn down!

And as it turns out, I love eating savoury porridge too. I based this Miso Savoury Porridge on this one from Heidi over at 101 Cookbooks. I’m on an umami kick at the moment, so slathering it with miso (and butter, always) seemed like the way to go. I added barley and spelt to give the porridge itself some heft and a little chew. A poached egg on top, of course. Plus some pickled ginger for a burst of flavour, sauteed mushrooms for that earthy sweetness, coriander because just a hint of green. And a gorgeous seaweed sprinkle to tie it all together and give the bowl a spicy Japanese-y kick.

Basically, this porridge is the bomb. I ate it for lunch two days in a row, and only wished that I had more. 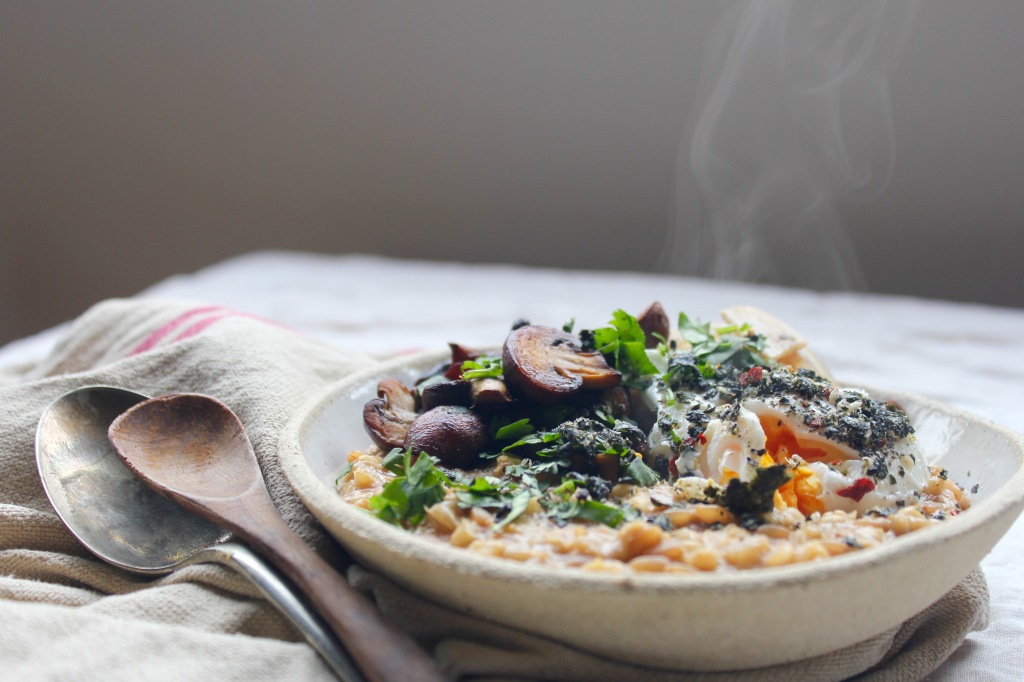 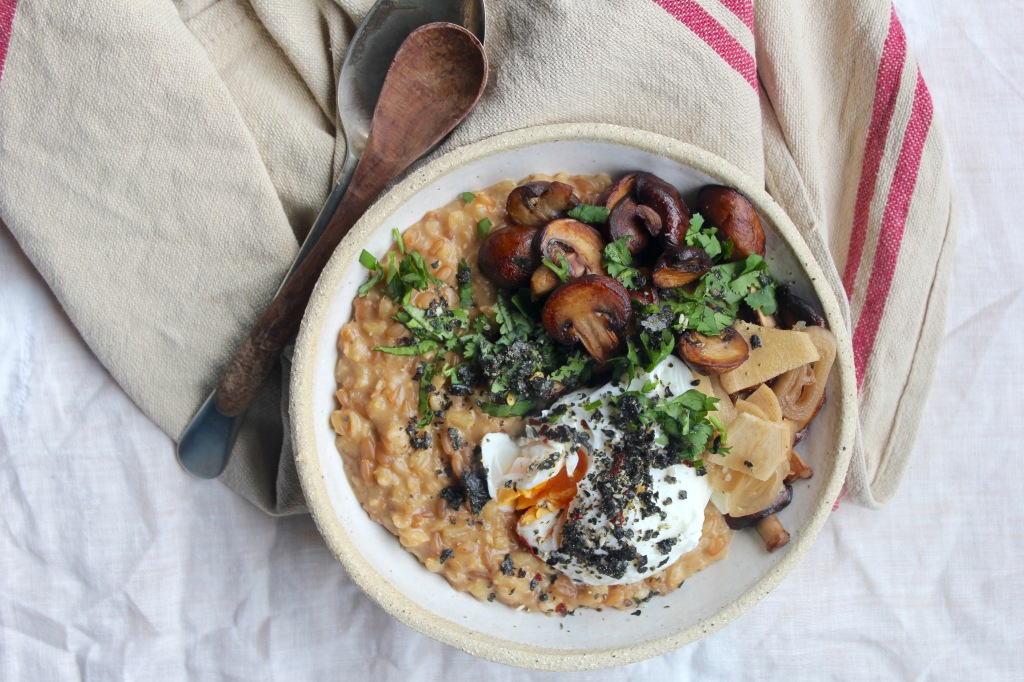 Soak the barley and spelt in a cup of water for at least one hour, or overnight.

While the porridge is cooking, finely slice the mushrooms. Melt the remaining tablespoon of butter in a saucepan over a medium-high heat, then add the sliced mushrooms. Cook, stirring frequently, until the mushrooms are well-browned (approx. 10 minutes). Remove from the heat.

When the porridge is almost ready, poach the eggs. If you don’t have your own poaching method, here is mine – add hot water to a shallow saucepan along with a generous splash of vinegar. Put over a high heat until the water is almost boiling, then gently crack both eggs directly into the water. Give the water a swirl, then let cook for three minutes (for a very runny egg) or up to six minutes (for a firmer yolk).

Prepare the seaweed sprinkle by adding the nori, sesame seeds, salt and pepper to a mortar & pestle and grind until all combined (it’s okay if there are some larger strips of nori).

Divide the porridge between two shallow bowls. Top each bowl with a poached egg (drain first in a slotted spoon), the mushrooms, a generous lot of coriander, a pinch or two of the seaweed sprinkle, and pickled ginger, to taste.